Are you guilty of falling for these 5 ecommerce myths?

Web traffic surges are common to big online sales. Just as common are myths about how to deal with traffic spikes. Make sure you're not misled by one of these misconceptions.

Seasonal promotions are make-or-break for many online retailers. These special offers tied to a certain time of the year drive high web traffic and enormous sales.

While Black Friday might be the blockbuster seasonal promotion, ecommerce businesses run many more. Cyber Monday combines with Black Friday as part of Cyber Week I, and Cyber Week II happens just before New Year’s. Singles’ Day’s celebration of singleness is quickly spreading from Asia. The Back-to-School season is big for anything from futons to footwear. And other holidays like Mother’s Day offer niche products a chance to shine.

But running smooth seasonal promotions presents high technical complexity for ecommerce managers. The massive volume of online traffic and rapid speed of orders can strain any website or app.

Even though online campaigns like Cyber Monday have a fixed duration, online traffic levels can swing wildly throughout the day.

A competitor’s site could have crashed, sending customers your way. Or a mid-day markdown of a popular item on your website could attract tons of digital eyeballs. For set days like Black Friday that start when the clock strikes midnight, shoppers could swamp ecommerce shops in anticipation of the sale—crashing unprepared websites before the sale even begins.

Adding to the complexity is knowing that cashing in on orders from these seasonal campaigns is mission-critical for online retailers. During these days, website performance can truly make or break an online business. Two fears stand out for ecommerce managers. Fear of the financial costs of failure. And fear of a crash that’s out of one’s control, like when a crash stems from a 3rd party integration.

Across retail sectors, any successful online sale has one thing in common: driving traffic. Despite this reality, even the most veteran ecommerce managers can have misconceptions about the impact of online traffic surges on their website performance.

Here are five common ecommerce myths you’ll want to be sure to avoid.

1. I can (auto) scale my way out of traffic spikes

Server autoscaling has become a trendy buzzword of late. Proponents have marketed it as the silver bullet for load balancing challenges. But autoscaling’s promise hides the fact that it’s a limited tool to prevent traffic surges from crashing your website.

The biggest problem people gloss over? You can't just autoscale any application. Building performance into a website is a multi-step, complex process. You can't just take any off-the shelf software product and think you can autoscale it. It takes a huge effort to build in autoscaling. It’s expensive. And even if you have done that, there are still a ton of bottlenecks in the application that you have just not thought about and will require load testing to be exposed.

Not only does autoscaling require expertise to set up, it requires skill to maintain. Many IT teams consist of devoted DevOps engineers handling the technical details. If Amazon’s 2018 Prime Day failure tells us anything, it’s that scaling to sudden online traffic peaks is exceedingly complex.

Next, standard autoscaling plans include a refresh rate of five minutes. This makes websites vulnerable to sudden spikes in visitors. The five minute start to a big sale like Black Friday is more than enough time to crash the sites of even enterprise retailers, especially as a site accumulates visitors just before the start of the sale.

Last, and perhaps most importantly, stepping up hosting capacity doesn’t address 3rd party overload limits. The ecommerce flow involves many such touchpoints, like payment gateways, stock control extensions, or shipping integrations. These systems have thresholds of their own, fully independent of your own website’s capacity. And during big online sales, they don't only experience higher traffic from your site. They're inundated with requests from other websites, too.

2. I’m in the clear if traffic surges involve fewer concurrent users than I’ve tested for

Think of a supermarket. Supermarkets are huge and have room for many shoppers if they’re spread through the physical store. Some are in the dairy section, some in produce, others at the deli. The main bottleneck exists at the checkout counters, where there are only a fixed number of cashiers. But only a fraction of the shoppers are there. So the cashiers can keep the lines flowing and the shoppers happy.

Now, imagine if everyone in the store headed for the checkout counter at the same time. The number of shoppers in the store hasn’t changed. But suddenly the cashiers are overwhelmed and the customers are frustrated.

Seeing this scenario play out online isn’t far-fetched. Conversion rates on Black Friday nearly double compared to the average. In 2017, for example, Nordstrom.com’s conversion rate jumped to an astounding 8.4% on Black Friday, from an average of 4.8%.

And more shoppers chose to buy what they added to their baskets. U.S. cart abandonment rates on Black Friday 2018 were more than 4% lower compared to the first week of November. This data shows that shoppers are heading for the resource-intensive checkout at much higher rates during your biggest sales. With high traffic to begin with, this only heightens the chance of an overwhelmed bottleneck.

When thinking of website capacity, either for load testing or server scaling, many people forget how important the distribution of shoppers is. The common Number of concurrent users or Active users right now metric, as shown in tools like Google Analytics, only indirectly signals the potential strain on site infrastructure. If you think you can handle 1,000 concurrent visitors but all are simultaneously in a bottleneck like your payment page, your site is liable to slow or crash.

Instead, approaching website traffic capacity from a flow-based approach considers how users are spread throughout the customer journey. This gives a truer picture of capacity.

3. If my site crashes I can quickly bring my site back online

The IT department has to scramble to find the root cause of the problem. Websites can crash for several reasons—coding errors, 3rd party plugin failures, DDoS attacks, data center outages, just to name a few.

Even if online traffic overload is the suspected culprit, your IT department will have to use valuable time troubleshooting and finding the root cause. And traffic is liable to crash the site again when it’s brought up. When the site goes down, it impacts your CDN’s cache layer (if you’re not using a CDN, you really should).

This cache provides a buffer for your servers. It supplies static content pages (like a Contact Us page), freeing up your servers to support resource-intensive dynamic pages (like a Products page). If your site goes down, your CDN cache can expire. Then when your site is brought back online, all requests can hit your servers directly, causing another crash.

To make matters worse, if technical support finds that the traffic bottleneck involves a 3rd party system, the solution can be out of your hands (see Misconception #1). Unless, that is, you have a way to manage traffic inflow.

Learn how to manage traffic inflow

A 2016 study of 100 U.S. enterprises found that 65% of organizations reported taking over an hour to fix website issues, with 29% needing over 3 hours to deal with the problems. Once an ecommerce website goes down, the battle is already lost.

4. So long as I prevent a complete crash, everything is okay

A study based on 2015 data showed that 1 in 3 shoppers leave a website if they wait more than 5 seconds for a page to load. And shoppers have since become even less patient as faster load times become the norm. In a 2017 study, as little as a 100-millisecond delay decreased conversion rates by 7 percent. A website congested with traffic is at high risk of seeing customers drop off.

Even more striking is consumer reaction to slowdowns on mobile devices. According to research by Google, 53% of mobile users abandon websites that take longer than 3 seconds to load. Google's neural-network predictive model found a 90% increase in bounce probability when page load time increases from 1 to 5 seconds.

The consumer ecommerce shift to mobile has no end in sight. One in three purchases and 51% of website traffic came from mobile during the 2018 holiday season. Looking to 2019, mobile ecommerce sales are expected to grow 29.9%, 6 times the growth of desktop sales.

We’ve already seen how mobile shoppers are more impatient. So, it’s clear that with such mcommerce growth, website slowdowns are about as bad for sales as a full-on crash.

In other words, in 2019 slow load time is the new downtime.

5. With a website crash, I only lose out on sales

It’s true that lost sales are a huge opportunity cost of website crashes. As an example, clothing retailer J. Crew reportedly lost over $700,000 in orders during the few hours their site was down on Black Friday 2018. But as bad as lost orders are, they’re not the whole picture when assessing the cost of a website crash.

Internal costs add up. When customers experience issues with a website, they turn to customer support channels. Staff become flooded with social media complaints and customer service phone calls. This incurs costs as employees are added to or diverted from other tasks. The IT department will be preoccupied with solving the website issue and will have to drop other projects.

A website crash can also signal or lead to compromised internal systems. Amazon faced this on Prime Day when warehouse employees couldn't scan products or pack orders due to the website systems failure. Lost operational productivity compounds these costs, which helps explain why in 2017 over 81% of enterprises had downtime costs in excess of $300,000 an hour. 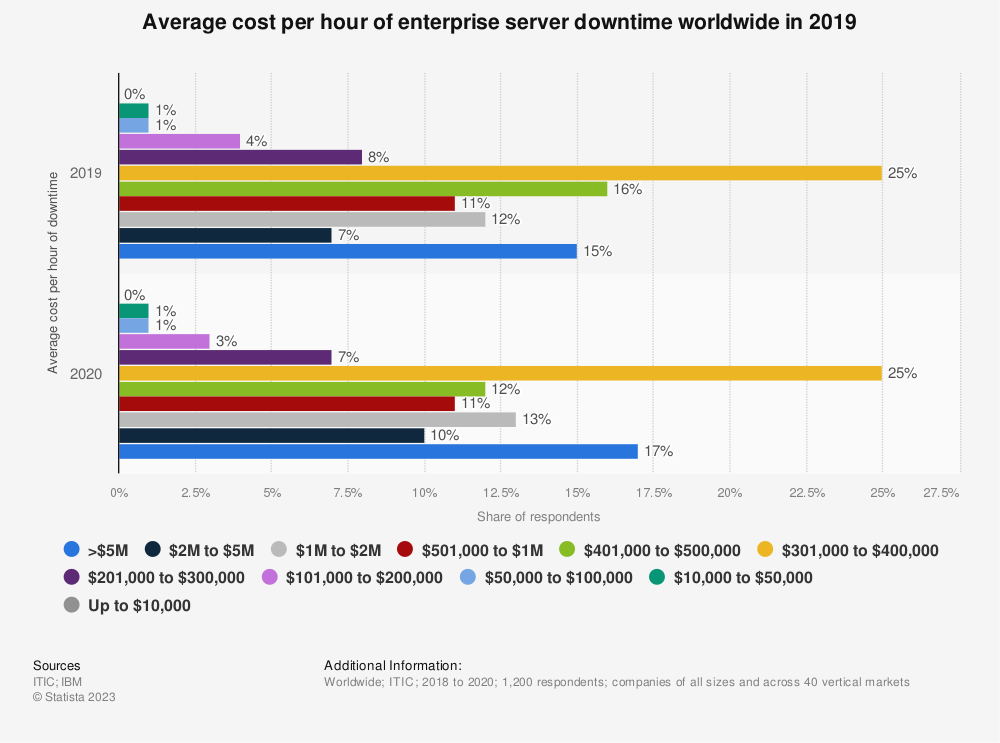 And ramifications extend beyond the sales lost during the website or app crash itself. Studies show that a full 79% of potential customers who encounter poor website performance on their first visit would avoid buying from that website in the future—often jumping to a competitor’s site instead. Every shopping experience is a critical touch point. And website crashes can damage search engine optimization efforts, making it more difficult for shoppers to find your website in the long term. Taken together, this results in missed sales long after the downtime is over.

All of these additional costs help explain why missed sales only account for about one quarter of the holistic cost of downtime.

(This post has been updated since it was originally written in 2019.)

Get my ecommerce guide